The Promising Future of T1D Management

Type 1 diabetes (T1D) is an autoimmune disease in which the immune system mistakenly destroys the insulin-producing cells (beta cells) in the pancreas. Insulin is an essential hormone that regulates the amount of glucose in the blood. Because people with T1D can no longer produce insulin, they must continuously monitor their blood glucose and take insulin with every meal to survive.

The “Dark Ages” of Diabetes Treatment

As if managing Type 1 diabetes isn’t challenging enough with constant glucose checks, carb counting, and insulin dosing, imagine if you were living with T1D 75 years ago, prior to the availability of the medical advancements we have today. You would sterilize your needles and large glass syringes by boiling them daily. Sharpen your needles manually using an abrasive stone. Test your urine for excess sugar by heating it in a test tube mixed with a chemical solution. And your blood glucose would only be checked in a doctor’s office once a month! The complications you would inevitably develop from diabetes would be viewed as “normal” and nothing could be done to slow their progression. This is during a time in which the medical community thought it was nearly impossible to regulate a diabetic’s blood sugar. I guess if I was only checking my blood glucose once a month, I’d believe this, too.

Treatments and technological tools for managing T1D have come a long way in the last 100+ years since the discovery of insulin. This timeline highlights a few of these milestones.

(based on the American Diabetes Association 75th anniversary timeline) 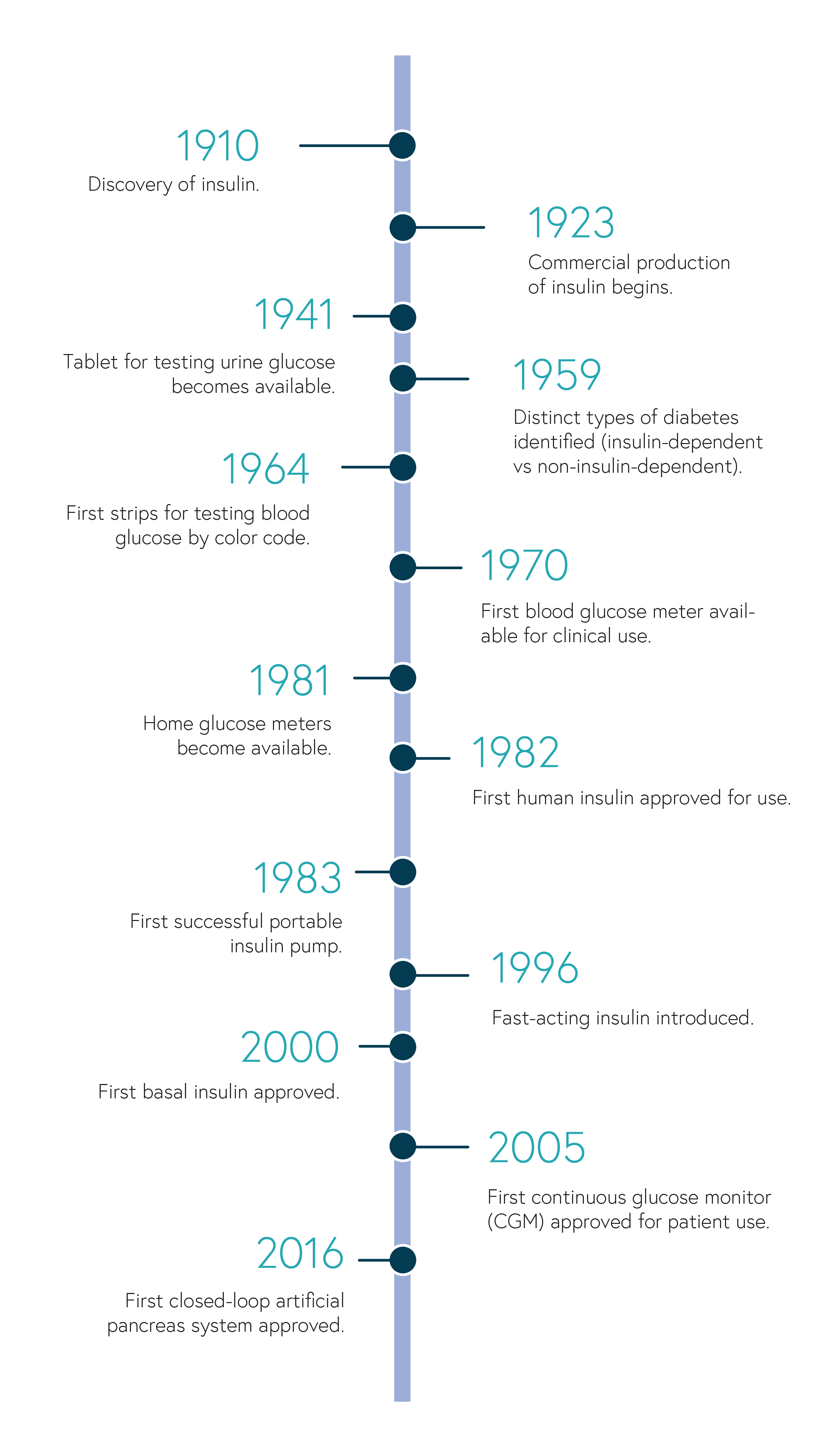 Today, we have disposable syringes, insulin pens, continuous glucose monitors, insulin pumps, and glucose meters, to name a few, and some of which we may take for granted. These tools help people to better regulate their blood glucose and optimize insulin dosing, improving overall quality of life and decreasing the risk for complications. Although scientists still don’t fully understand what triggers the immune system to destroy the insulin-producing beta cells, research is developing rapidly with the goal of achieving blood glucose control while lessening the burden of diabetes management. The artificial pancreas, pancreatic islet transplantation, beta cell regeneration, and smart insulin are only a few of the many exciting advancements that may revolutionize T1D treatment.

With all the promising research taking place, management of T1D can only continue to improve. Perhaps not too long from now, diabetes-related complications and reduced life expectancy will become a worry of the past. For now, I look forward to the day when my daughter and I can indulge in a brownie-bottom sundae without agonizing over carb count and high blood glucose numbers.

Who Are The Diabetics on The Margin?